When Sylvia Harris was looking for a possible career change in the early 1990s, she never expected to be so drawn to law enforcement. Initially, Harris was looking to work at the jail or detention center as a correctional officer. But after some research, she figured it was not for her.

“I went on a ride-along with an officer named Carl Toppin, a black officer with PSLPD,” Harris said. “Right away I knew, ‘I could do this, and I will do this.’ ”

After that initial ride-along, Harris completed all of the required schooling, paperwork and tests in order to be hired by the Port St. Lucie Police Department. And, in 1991, she became the department’s first African American female officer.

“It was definitely not a walk in the park at the beginning; people were not used to having a black woman work with them as an officer,” Harris said. “Many of those officers have become some of my best friends, more like family, but in the beginning, I felt I had to try and fit a mold in order to fit in.”

Harris said she has always been the type of person to lay everything on the table. She holds no secrets and has always let her personality glow brightly. But, she explained, at that time there were very few black officers, let alone one who was also female.

“I’ve never been a timid person, but I also felt like I needed to get my foot in the door and test the waters before I felt 100% comfortable,” Harris said.

As time went on, the department and the city began to feel like home, according to Harris.

“I made it clear that I was here to stay and was going to fight for what I believed in,” she said.

In the beginning, Harris was assigned to street patrol in District 3 which included the area west of the Turnpike Bridge at Bayshore Boulevard and around Rosser, Darwin and Becker roads. During that time, Harris said she was called out to domestics, traffic, drug, neighborhood disturbance and other calls.

“One of my first domestic calls, I was about 32 or 33 years old, I was called out to a home off of Becker Road and it was reported the husband had hit his wife,” Harris said. “I walked in and spoke with both parties, witnessed the wife was obviously injured and went to speak to her husband.”

Harris said she did not have to say much, that the rather burly, 6-foot-something man turned around and placed his hands behind his back.

“He knew he did wrong and was compliant and I spoke with him. I always spoke with people,” Harris said. “Some years later, I was in the grocery store and this man approached me. I did not recognize him at first and he said ‘I will never forget you, you treated me with respect even though I did wrong and I will never forget how that turned me around.’ I was so shocked that I had that effect on someone just by being myself and it really stuck with me throughout my career.”

Some of Harris’ favorite years with PSLPD though were during her time as a school resource officer at Bayshore and Port St. Lucie elementary schools. SROs not only serve as a liaison between the department and schools, but also help maintain the safety of students and staff. They also serve to keep positive relationships as well as educate and counsel students to prevent juvenile delinquency. 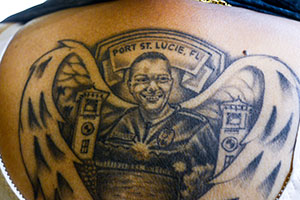 “I was an SRO for about five or six years and I truly loved those kids, they were my heart,” Harris said. “It was a great feeling to have these kids call your name, run and give you a hug. I was proud to be making an impact on them, just by us talking and me teaching them to be their best.”

Sgt. Keith Boham worked with Harris for several years and remains close with her.

“Sylvia is a remarkable person, always willing to help others who were in need without an expectation of recognition,” Boham said. “I think she really enjoyed seeing children smile. It is clear that Sylvia had a positive impact on students while she served as school resource officer and with the Port St. Lucie Police Explorers.”

After her time as an SRO, Harris returned to active patrol in the Tradition development and said she loved those years. Starting in 2012, Harris describes Tradition as her home away from home.

“When I was working Tradition, I really got a huge sense of community and felt a lot of love,” Harris said. “Everyone was very welcoming and always checking in on one another. Those people remain friends and family even today.”

Officer John Fazio has become a close friend. He said Harris’ impact on the department will be hard to forget.

“Sylvia is a woman with a heart of gold. She has that motherly instinct to make sure her friends and family are well taken care of and in good spirits,” Fazio said. “She has an infectious positive attitude and a look that says, ‘don’t mess with me, boy!’ Overall, she’s a wonderful, caring person who had an amazing career.”

In 2016, Harris entered DROP, police-speak for a deferred retirement option plan; this is when a city employee is not ready to leave, but is nearing retirement age.

“My health took priority and I knew I needed to take better care of myself physically and mentally,” Harris said. “I enjoyed my 29 years with PSLPD but I knew it was time for me to move on, let a new generation in and enjoy my retirement.”

On Feb. 5, the city and the police department threw a huge retirement party for Harris. She said that while she has made many deep connections over the years, she never expected such a huge turnout from those in the community.

“I was floored by the amount of support and love that flooded the party,” Harris said. “We have a really incredible community of people around here and that is something I will forever cherish and never forget.”

Who or what inspires you: “My mother. She went through a lot and managed to do well for herself and our family even with no education. She stayed strong and raised me and my siblings.”

One thing most people don’t know about me: “I can sing and have been singing almost my whole life, usually with the church choir or small events.”