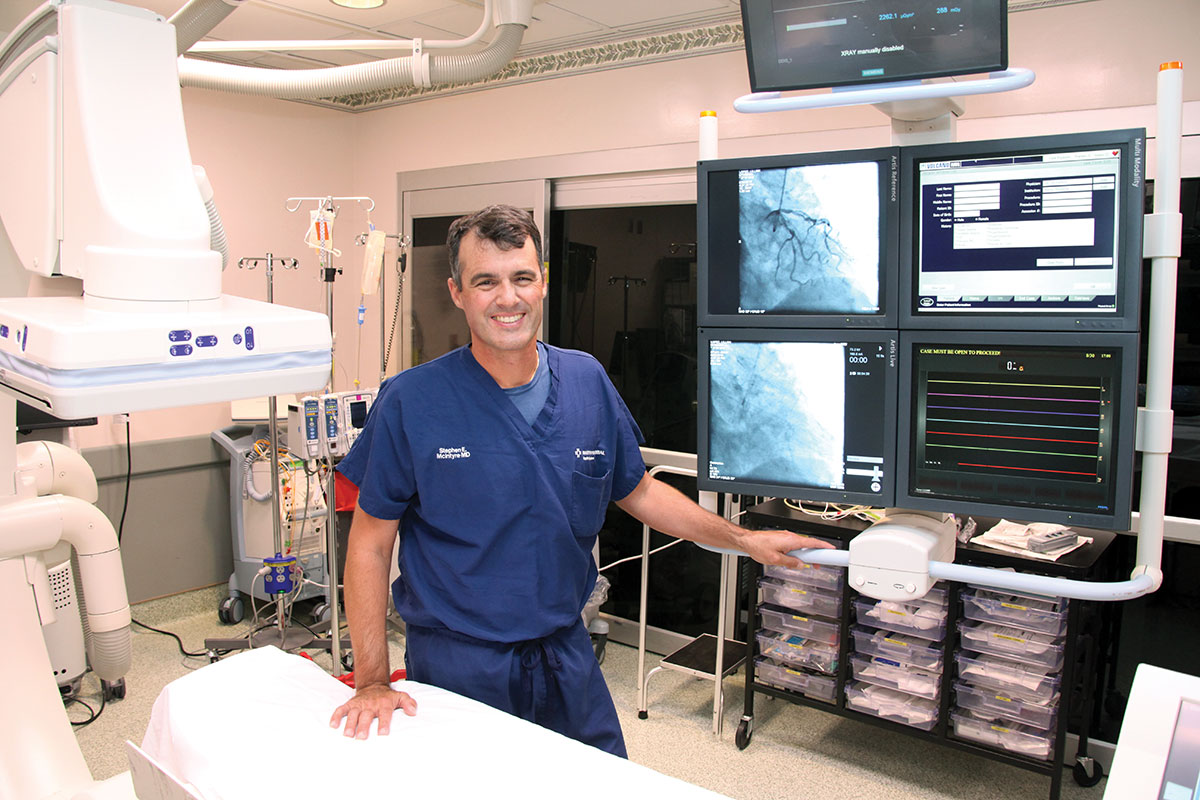 Dr. Stephen McIntyre relaxes during a short break in the catheter lab at the Frances Langford Heart Center of Martin Medical Center. He specializes in complicated, non-invasive heart surgeries performed without cutting through the patient’s chest. GREG GARDNER PHOTO

When he is not running around Stuart or competing in races, E. Stephen McIntyre walks between heart patients, often healing them with cutting-edge medicine.

McIntyre’s specialty of interventional cardiology allows minimally invasive procedures to repair heart valves without opening up the patient’s chest. When a patient is too sick for open heart surgery, McIntyre can replace an aortic valve with a bioprosthetic valve using a catheter inserted in a leg artery while the heart is beating.

Despite being on his feet for long hours in the operating room, the triathlon competitor runs three times a week while he is on call. It takes 30 minutes to mobilize the five-person team so McIntyre never ventures too far from Martin Medical Center, where the catheter lab serves two patients at a time, admitted from the four Martin Health System hospitals. During procedures, the control room and two operating rooms are abuzz with technicians working toward a successful outcome.

Although medicine is in the family blood, McIntyre didn’t set out to become a doctor. His father was a doctor. His older brother is a thoracic cardiac surgeon while three sisters are nurses.

“Medicine was a big part of my life growing up and my father used to work long hours and he would come home and read journals,” McIntyre says after an afternoon of procedures. “My father said your profession is a part of your personality.

“I got to school and I thought aerospace engineering, but I decided to take chemistry classes to keep medicine as a backup,” he says. “I lacked imagination, but I liked science. I didn’t know what I wanted to do. I spent four years studying something that was not germane (to medicine).”

After receiving his medical degree from George Washington University in Washington, D.C., McIntyre served his commitment of seven years in the Navy while an intern and resident at nearby Bethesda Naval Medical Center in Maryland. He left the Navy as a lieutenant commander.

He then completed two fellowships at the University of Florida before arriving on the Treasure Coast. McIntyre has been on the staff at Martin Health System for the past 10 years. He performs eight to 12 procedures a day, five to seven days a week. He also installs and replaces pacemakers, which usually last eight to 10 years.

Transcatheter aortic valve replacement procedures, which were approved just three years ago, can also begin from the shoulder area and proceed to the heart. The hardest part of his job is when procedures don’t end well.

“Unexpected complications are sometimes unavoidable and end in a bad outcome,” McIntyre says. “Complications occur despite our best efforts.”

While he runs for fun, McIntyre has competed in more than 50 races of different lengths during the past 15 years including three triathlons, a half ironman event and an Olympic triathlon. He would like to compete in an ironman triathlon, but won’t because “it is a full-time job to train for the ironman.”

Despite his workload, the father of three children makes time for his family and wife, Gina, who is a pediatrician practicing part time in Indian River County. “Steve loves his kids,” she says. “Fishing and running give him tranquility.”

Dad and his 11-year-old son, Thomas, enjoy spearfishing together. The family loves boating and fishing. All three children run races of different lengths and McIntyre runs with them in the neighborhood or at the track.

“For us being active is a lifestyle,” he says. “You have to get off the couch and do something, whatever you love.”

Freediving and woodworking are other hobbies. McIntyre says he is careful in his woodshop not to harm the hands that are so important to his profession.

The catheter lab is where McIntyre excels in treating heart disease.

“It (my work) ranges every day, a combination of complex thought mixed with the mechanical component,” he says. “I love problem solving. Cardiology is the most dynamic in terms of changing technology. I am very fortunate to be practicing where and when I am. It is an amazing time to be in medicine.”

Who inspires me: “My dad was a person who had character, a set of values he lived by and passed on to his children – faith and hard work. He told us we all have a purpose to use our talents to help other people.”

Something most people don’t know about me: “While in the Navy I spent a month in Egypt living across from the Great Pyramids of Giza. I was conducting infectious disease trials, enrolling people to test an anti-diarrhea medication in advance of (military) Operation Bright Star.”