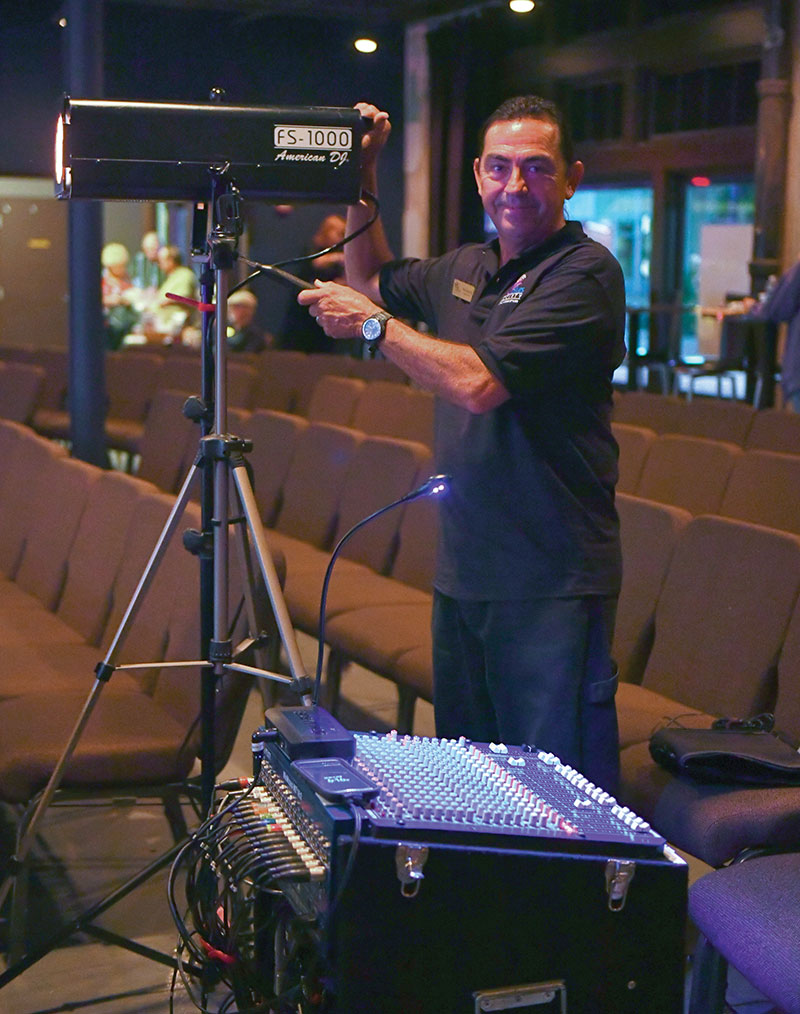 Although he’s not one to toot his own horn, Max Duhalde has spent his life making himself known on the local music scene.

Once a trumpet player in various bands, he has turned to his self-taught percussion skills in recent years, playing drums with The Coffee Beans Jazz Band and the Rowdy Roosters, a Dixieland band. He also puts out the beats for Rivertown, a country, bluegrass, light rock and Celtic music band that plays once a month at the newly renamed Pint Brush on Avenue A in Fort Pierce. But he does revert to playing his horn with the Latin Heritage Orchestra, a seven-piece salsa band, for which he plays lead trumpet and does the sound work.

Born in Santiago, Chile, he was given his grandfather’s name: Maximiliano Duhalde. His father, Orlando Saavedra, was a pilot and officer in the Chilean Air Force, often flying the president of Chile in his official plane. When his father retired, he was offered a position in international sales with an aircraft company. This job brought the family to the United States where they settled in Rochester, N.Y. when Duhalde was 7.

The transition from Spanish to English was a breeze for him, he says, adding, “I went to a British school in Santiago and so English came easy for me.” When he was 8, the family moved to Vero Beach, where his father took a position with Piper Aircraft Inc. “I went through Indian River County public schools,” he says, graduating from Vero Beach High School, where he lettered in cross-country and track for four years and played the trumpet in the school’s marching band, concert band and stage band.

“Our band director in high school took us on a lot of trips where we met many top musicians. I met Woody Herman and Maynard Ferguson, one of the elite trumpet players of the jazz era, among others,” he says, adding that this exposure let him realize he could make money by perfecting his craft.

The next transition, to Indian River Community College, was an easy one. Duhalde played in the college’s first concert and stage bands under the direction of Anthony Allo. Allo’s wife, Roberta, who was the college chorus instructor, started a restaurant in the Tradewinds Cafeteria site at the former Searstown Shopping Center on U.S.1. The restaurant featured singing servers from the IRCC Company Singers. Allo managed to get jobs for his music students and Duhalde worked there on the Broadway music shows staged for diners.

Part-time work during his college years included a stint as a seasonal helper at United Parcel Service. This work drew him in as he became a full-time UPS driver after college, filling his off hours with music and sound gigs in the area.

In the 1980s, he played trumpet with the Joe Moniz Big Band, playing at the opening of the restaurant at Panther Woods Country Club. In the Moniz group, he became friends with another trumpet player, Mark Green. That friendship carried through the years as the two play together in the Rowdy Roosters and the Coffee Beans, although Duhalde has switched to drums in these two groups.

“All my friends in high school were drummers,” he says as a way of explaining the switch of instruments. “They had drum sets in their living rooms. I learned to play on my own and then started playing drums at churches in the area.

“Don Bestor with the Fort Pierce Jazz & Blues Society called me after Chris Hulka died. He had been doing their sound work and they needed somebody to fill in and set up the sound system for their performances,” Duhalde says, adding that sound work is one of his accomplishments.

Duhalde played second trumpet, filling in at first trumpet when needed, for the inaugural season of the Atlantic Classical Orchestra at The Lyric Theatre in Stuart and at Vero Beach Community Church. He also played in the orchestra’s second season.

Although he helps support his family with what he makes from sound setups, he is most enthusiastic about working with fellow musicians and friends on the local jazz scene. Duhalde and Green make up two members of The Coffee Bean Jazz Band, playing drums and trumpet, respectively. The others are his friend and fellow band member from Vero Beach High School, George Remer, who plays trumpet, flute, saxophone and keyboards, and another saxophone player, Mike Howley. The group plays smooth jazz at private parties and country clubs. They played at Jazz Week for the Fort Pierce Jazz & Blues Society in March 2016 and hope to be back in 2017.

In the meantime, if you are out and about on the Treasure Coast and there is live music being played, keep an eye out for Duhalde, he just might be there playing an instrument or running the sound system.

Age: 58
Lives In: Fort Pierce
Occupation: Musician
Family: Married to Hayley; stepson Tony, stepdaughter Kaylyna and daughter Kianah Linda Rhiah, a Hawaiian name that means cool mountain breeze with beautiful flowing rivers; two grandchildren, Daniel and Isabella
Education: Associate in Arts degree in performing arts, Indian River State College
Hobbies: Deep-sea fishing; scuba diving; spear-fishing
Background: Was born in Santiago, Chile, and grew up in Vero Beach; retired from United Parcel Service after 30 years; local musician and sound man; board member of Fort Pierce Jazz & Blues Society
What Inspires Me: “Music is my inspiration. Every year, I went to New York City and watched concerts in Madison Square Garden and I traveled a lot as a youngster, listening to musicians. All of that inspired me to perfect my music abilities.”
Something People Don’t Know About Me: “I used to be a maniac surfer. One year, I hooked my surfboard up to my motorcycle and drove up the coast, following Hurricane David and later Hurricane Frederic. I surfed off the Outer Banks. I surfed at Jones Beach in New York City. A police helicopter flew over me and the pilot got on the PA system to ask if I was OK. I told him I was fine, but to get out of there as the helicopter was ruining my waves.