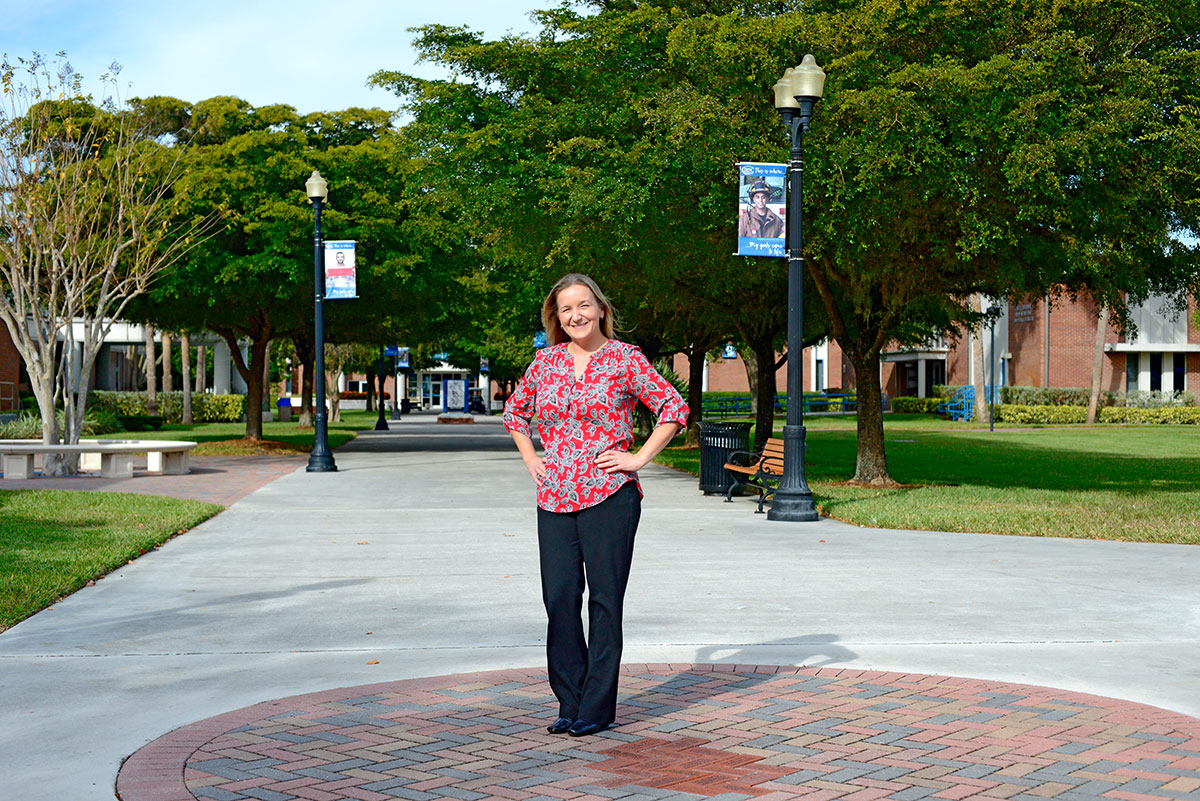 Rochelle Popp-Finch stands by her honorary brick along the main walkway of the Indian River State College campus in Fort Pierce. She was honored by the state community college system for her achievements as a leader of student government at the college and at other campuses around the state while a student at then-Indian River Community College. She now works at IRSC as the director of student development and the college ombudsman. ANTHONY INSWASTY PHOTO

When she moved to Port St. Lucie after graduation from high school in 2000, Rochelle Popp-Finch had no idea how much her life’s goals and educational plans were going to change.

Leaving her home in Millville, New Jersey, was a big step. She lived with her grandmother, Marie Russell, who encouraged her to enroll at Indian River Community College (now Indian River State College). She knew she would have to get involved in clubs and organizations on campus as well as being involved in the community to get a sense of belonging. Her first step was joining the IRCC cheerleading squad and becoming its representative in the Campus Coalition Government.

That first step led to many more as she was appointed assistant secretary of the CCG in her first year at IRCC. The next year, she served as CCG vice president and also took on a position at the state level with the Florida College System Student Government Association (FCSSGA), serving as the District 2 Jurisprudence, representing IRCC and eight other community colleges. In her third year at IRCC, she served as CCG president and as FCSSGA District 2 coordinator. All her efforts garnered a big award, as she was named the Florida College Student of the Year in 2002. While at IRCC, Popp-Finch earned an associate in science degree in legal assisting and an associate of arts degree in criminal justice. She was preparing herself for law school.

Completing her last two years of schooling at Florida Atlantic University and earning her bachelor of arts in criminal justice, she continued to work in student government as the Senate Speaker, taking a position with FAU after graduation. “I was the advisor of the student government and the assistant director of student involvement and leadership. It was all in student affairs.”

Besides her mother and two younger siblings back in New Jersey, she had left behind her high school sweetheart, Claude Finch, in the move to Florida. It only took him six months before he had arranged to join family in Orlando. From there, the couple carried on a closer, but still long-distance, relationship during the five years she was in college, marrying in 2012.

Popp-Finch came to Indian River State College as an adjunct instructor in 2007 and was hired as a full-time staff member in the Student Affairs Office in 2011. This is where she found herself.

“When I came here, I wanted to go to law school,” she says. “But I am all about when you find your passion and live your purpose, do it. I enjoyed a lot of the things I encountered as a student in these positions and the leadership roles I undertook in college. And that’s why I went down this path rather than into law.

“That said, I work until the job is done, but the job is never done,” she adds with a laugh.

Mentoring students in building their leadership skills and helping them rise to their potential is something Popp-Finch does with ease. She says she has served on the state advisory board for the FCSSGA for the past five years. In that time, about 10 of the student government officers she has worked with have also served on the student executive board at the state level.

“They are really awesome students and it is exciting to see them take on these state roles,” she says. “It is a lot of extra work beyond their studies and what they are doing in student government on their own campus.

“Currently, three of the five CCG officers at IRSC are serving on the state executive board, and that’s pretty cool.”

An organized person, the 37-year-old wife and mother of two young boys manages to hold down a full-time job and serve on the board of directors of The Inner Truth Project, an organization helping sexual violence survivors heal, a project near and dear to her heart. She is on the Tools for Schools committee of the United Way of St. Lucie County and, along with all of that, she is the Home Room Mom for each of her son’s classes at Renaissance Charter School of Port St. Lucie.

Popp-Finch says she often thinks back on her years at IRCC and her student government advisor, Lori LaCivita, adding that LaCivita was like her “second mom.”

“She always pushed me,” Popp-Finch says. “She saw something in me. My goal in this position is to push students the way she pushed me. I have always been a driven individual.”

Popp-Finch has often been lauded for her work on the state level and at her college. In 2016-17, she received the Bob Graham Distinguished Service Advisor award, but last year she received a very special recognition. She was named to the Florida College System Activities Association Hall of Fame for her outstanding contributions and service to its activities and member institutions as a student leader.

“With the students, I feel like I have come full circle,” Popp-Finch says. “Now I am giving back to the place that helped make me become who I am. Even with serving in the state organization, I saw what it was like from the student side, and now I know what it is like from the advisor’s side. It gives you that full perspective and helps you be more effective in your position.”

Age: 37
Family: Husband, Claude Finch; sons, C.J., 8; Cayden, 5.
Lives in: Port St. Lucie
Occupation: Director of student development and College Ombudsman at Indian River State College
Education: Associate of science in legal assisting and associate of arts in criminal justice, Indian River Community College; bachelor of arts in criminal justice, Florida Atlantic University; master’s degree in public administration, University of Central Florida
Someone who inspires me: “There are actually two people who inspired me to dream more, learn more and become more: my former student government advisor, Dr. Lori LaCivita, and my grandmother, Marie Russell. Throughout my college journey, Lori encouraged me to take on leadership roles not only at the college, but in the community and within the state. And, if it wasn’t for my grandmother, I may never have found IRCC. Throughout my whole life, my grandmother has always been my rock, my supporter, my best friend and my biggest cheerleader.”
Something most people don’t know about me: “Higher education was not the career I originally intended on pursuing. When I started college, I wanted to be an attorney.”