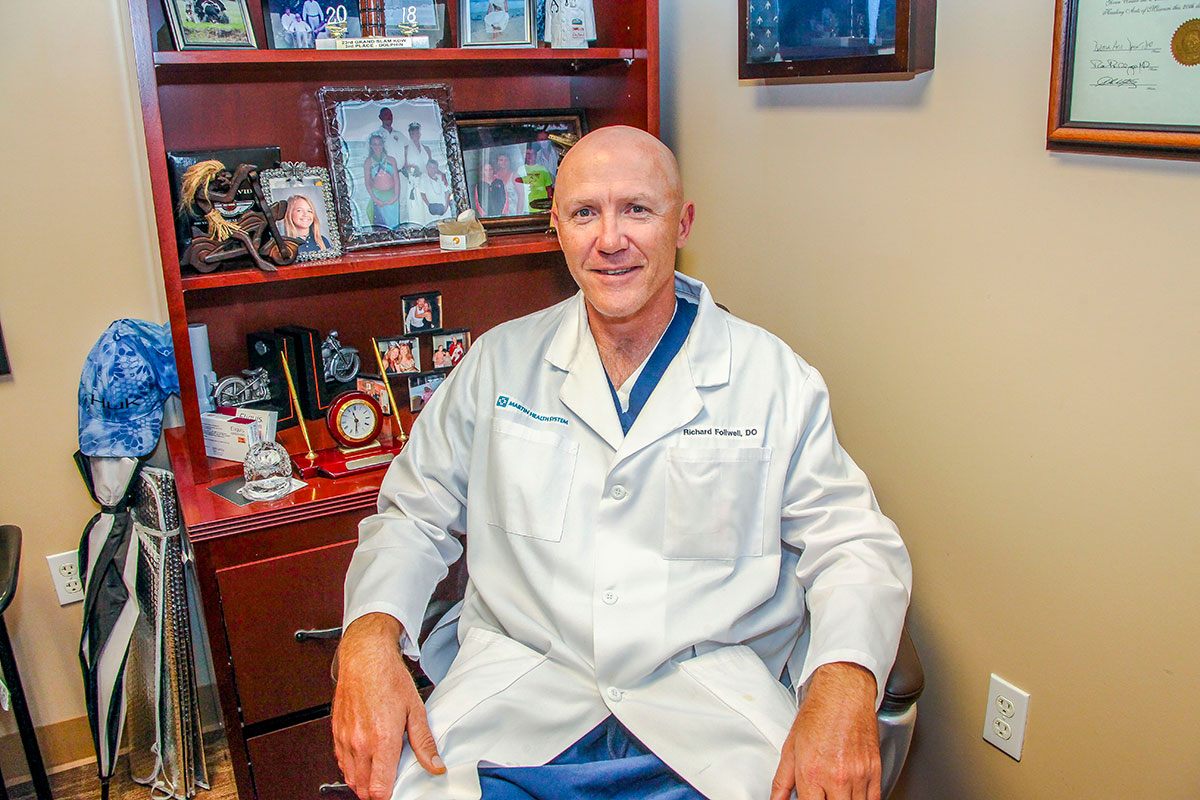 Originally from landlocked Zimbabwe, Dr. Richard Follwell is now comfortable during his off days on the open seas of the Atlantic Ocean as he hunts for fish to fight. He was a big-game hunting guide before coming to the U.S. for medical school. GREG GARDNER PHOTO

When Dr. Richard Follwell is not performing lifesaving operations on obese patients at the Center for Bariatric and Metabolic Surgery in Martin County, he loves to fight the largest sport fish he can find, usually throwing them back.

Born in Zimbabwe and raised on a dairy farm, Follwell had always wanted to be a veterinarian. While working as a big-game hunting safari guide, he received his life-altering break when he worked for a doctor and his wife from Tennessee. “David and Barbara Sullivan offered to bring me to the U.S. to go to medical school,” says Follwell. “I worked on their Arabian horse farm and attended school for three years at the University of Tennessee veterinary school. The first time I saw him (Dr. Sullivan) operate, I knew I wanted to be a surgeon.”

Another couple from Texas he led on a safari also contributed to his education. The one year he spent in the safari business taught him about customer service and work ethic while he worked “extremely long” hours, Follwell notes.

These days, Follwell performs surgery after surgery on patients with hernia, gall bladder or bowel problems. He specializes in bariatric surgery to help obese people lose weight. “When you have a person who weighs 350 pounds and they go to 190 pounds, it is extremely satisfying, and we have great patient outcomes,” Follwell says. “These are people who were going to die early.”

“The most difficult thing is being away from my family,” Follwell comments. “I can’t tell you how many birthdays, Christmases and holidays I have missed.” When the family goes out to dinner, he and his wife take two cars in case he is called to the hospital.

Although being on call one weekend a month, Follwell and his family try to go fishing two weekends a month. They have been to the Bahamas in their boat and are going to Mexico to fish for marlin. The couple also scuba dives, but not for spearfishing, and once owned a charter fishing boat in Alabama for several years.

Despite all of the fish the family catches, Follwell says he really doesn’t eat much fish, occasionally a little tuna, deep water snapper or swordfish. “I was born in a landlocked country in Africa and all we had were beef, sheep and pigs,” he explains.

Since he left in 1991, Follwell has returned twice to his native Zimbabwe, where his brother still lives. “With the current elections, how it will look, I’m not sure,” he says. “The new president has to get rid of corruption and get the economy back. The politics there can be very aggressive. When I left, it was two Zimbabwe dollars for one American dollar. Now it is 100 trillion to one. The money is worthless and all you see everywhere are (American) one-dollar and two-dollar bills. There was wi-fi that was encrypted and at no charge. In the past, protesters used it to organize riots until the government turned it off. Freedom of speech is not freedom of speech.”

If they can keep up with him, Follwell enjoys mentoring future doctors. He has two high school students who shadow him but don’t have interaction with patients. He also has two Florida State University medical students who observe and interact with patients. Two physician’s assistants are mentored as well.

“I love teaching students,” Follwell says before rising from his chair to see his next patient.

What inspires me: “Life. A friend of mine once told me, ‘There are thousands of things to see and do on this earth that God created for us and you are trying to do them all.’”

Something most people don’t know about me: “I was born and raised on a dairy farm in Zimbabwe, Africa.”