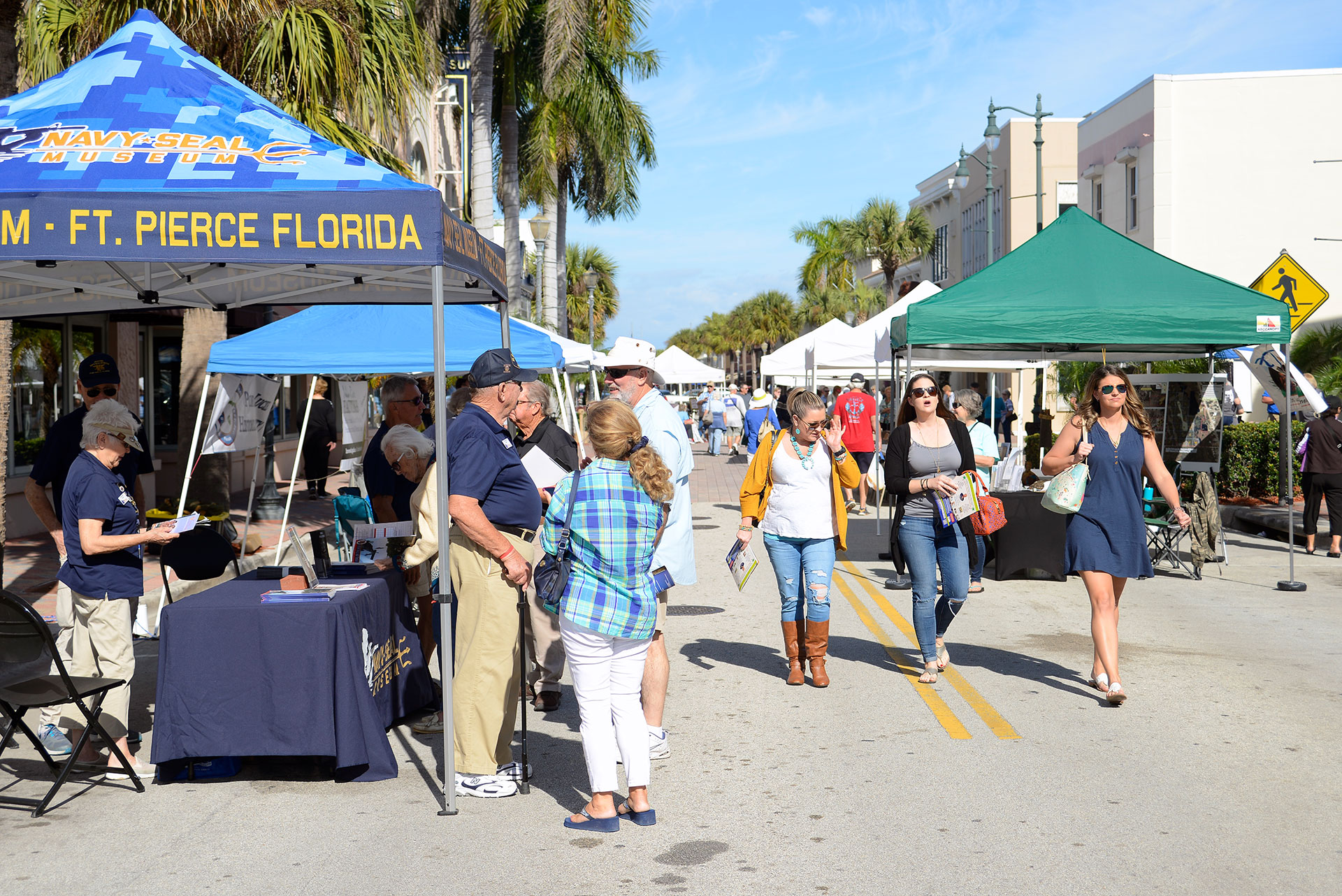 It might have been more fitting to rename Second Street “Memory Lane” during the third annual Treasure Coast History Festival held in downtown Fort Pierce.

There were those who attended the Jan. 12 event to relive the city’s history through re-enactors; to remember the early days of Port St. Lucie; to browse the many history books offered by local writers; or attend the lectures on pirates, Seminoles or the preservation of the area’s written history.

It was nearly standing room only at the Sunrise’s Black Box Theatre for “Saving Memories One Page at a Time.” Discussion focused on what local organizations are doing to digitize and preserve newspaper accounts, photos and historical documents that serve as a recorded timeline of the area. The audience heard from Pam Cooper, retired supervisor of the Archive Center and Genealogy Department for the Indian River County Main Library in Vero Beach, Adam Neal, editor of TCPalm.com and Treasure Coast Newspapers (including Indian River Press Journal, St. Lucie News Tribune and Stuart News) and Nancy Bennett from the St. Lucie Historical Society.

The job is monumental, especially for the historical society, which has thousands of files that need to be preserved, according to Bennett. In an effort to facilitate the project, Indian River Magazine is donating a digitizer scanner to the historical society, Publisher Gregory Enns announced, and he urged the audience to volunteer time to help.

“I know my librarian will say, ‘woo-hoo,’ when she hears about this generous gift,” Bennett said.

SENSE OF PLACE
One of many attendees at the discussion was Fort Pierce Mayor Linda Hudson, who was pleased that the festival has been successful in bringing so many people to downtown and the Sunrise Theatre.

A local history buff, Hudson thinks the festival serves an important purpose to people who live here and think they know the history or part-time residents who hunger for a sense of place.

“Many of these people spend half a year here or at some point they’re going to be living here full time,” she said. “They know about their hometowns in Ohio, but they really don’t know anything about the history of the place.”

The other two sessions were also well attended. Andrew Frank, an ethnohistorian who specializes in the history of the Florida Seminoles and the Native South, presented Modern By Tradition: Innovation & Transformation of Seminole Culture. The lecture was the first in a series of six presented by the Florida Humanities Council. It was co-sponsored by Main Street Fort Pierce and the A.E. Backus Museum & Gallery.

Allen Balogh, a retired educator who wrote Black Sails 1715, a historical novel about the sinking of the Spanish treasure fleet off the Treasure Coast, gave a presentation on the Golden Age of Piracy.

TASTY MEMORIES
Across the street from the theater, the Summerlin family was busily serving up its famous fish fry, always a popular spot for lunch or dinner at any festival. Last year, the family planned for 100 servings of mahi-mahi, coleslaw, hush puppies and baked beans but quickly ran out. Not taking any chances, they planned for 125 servings this time, according to Peggy Summerlin Allen. Those waiting in line to order passed the time perusing family photo boards that conjured up many Summerlin memories.

It was memories of the delicious food that brought first-time festival-goers Randy and Debra Cox of Port St. Lucie to the annual event. “I noticed it in the news and came for the fish fry,” Debra said. Randy had also planned on a trolley ride but was unable to make a reservation at the last minute.

“We were here before there was history,” she said with a laugh.

“We’re trying to collect stories from the people,” McGraw said. “We don’t want to see its history get lost.”

Members of the Sons of the Confederacy, Pvt. George W. Thomas, Camp 1595 set up an exhibit of artifacts and demonstrations right next to an exhibit of the 75th Ohio Volunteer Infantry. No hostilities broke out. Dru Dehart of Fort Pierce was busy sewing hairnets, which usually take her about 60 hours to complete. She said the nets would have been made predominantly by women in the North since Southern women usually wore bonnets while working in the fields.

Another popular event at the festival, which was produced by Indian River Magazine and co-sponsored by Main Street Fort Pierce, Sunrise Theatre and the St. Lucie Historical Society, was the downtown walk-around by paranormal investigator Larry Lawson, who spun tales of ghostly sightings at the Sunrise Theatre and Boston House.

Too bad those spirits cannot share their memories of times gone by on the Treasure Coast. They would make an interesting, eerie and most likely a popular addition to the daylong event.