Weeding out the pain

In Port St. Lucie, the grass and weed discussed on the golf course or at the office usually pertains to yards. Increasingly, however, people are talking about medical marijuana and the growing number of dispensaries that sell it.

The median age for Florida’s half-million registered medical marijuana patients is 48. With 20% of Port St. Lucie’s population in the 65-and-up bracket, its demographics make the city an attractive location for dispensaries.

Before opening a branch, the area’s first dispensary, Liberty Health Services looked at the number of doctors in the city who were on the state’s approved list for medical marijuana, currently 29, as well as other statistical data. Four other dispensaries also call Port St. Lucie home, with another 300 locations scattered throughout the state.

Dispensaries were added to the City of Port St. Lucie’s zoning code in July and August 2017. Although they share some of the same regulations as traditional pharmacies, additional restrictions and zoning changes were approved unanimously.

“The city recognized that the voters took a position on the statewide medical marijuana issue and it was up to [us] to make the necessary changes to the zoning code,” communication director Sarah Prohaska says. “ There was no opposition.”

Port St. Lucie dispensaries are required to have extensive security systems and operate a minimum of 500 feet from schools. Loitering and on-site consumption of medical marijuana products are prohibited. And although dispensaries may offer amenities such as curbside pickup or home delivery, drive-through services aren’t allowed.

Before 2018, the closest dispensary for Port St. Lucie patients was an hour away. People who could benefit from marijuana either traveled or risked arrest by growing their own plants or purchasing illegal products on the street.

“Our closest locations to Port St. Lucie were Sebastian to the north and Wellington and West Palm Beach to the south,” Beckwith says. “Having a more convenient location for the thousands of patients we serve in Port St. Lucie is simply part of our mission to best serve patients who previously were driving long distances, which was a burden for many due to their health conditions.”

Port St. Lucie’s five dispensaries each have extensive websites describing their products and services in detail. Just as some people prefer CVS over Walgreens or Publix pharmacies over Walmart’s, clients may prefer one dispensary because of its location or another because of a particularly helpful staff member.

Marijuana benefits patients with cancer, Parkinson’s, Crohn’s disease, post-traumatic stress disorder, epilepsy, glaucoma, multiple sclerosis and other specific conditions, as well as more general ailments such as chronic pain, depression or anxiety. A list of local prescribing physicians may be found on the website of the Florida Department of Health’s Office of Medical Marijuana Use: knowthefactsmmj.com.

Dispensary employees locate patients in the state’s online registry where their prescriptions have been logged in to show how many grams of smokable and edible marijuana are allowed per month. Unlike some controlled substance prescriptions which are limited to one pharmacy, any dispensary can pull up a patient’s information and dispense product. Prescribed amounts are automatically deducted from the data base as a safeguard.

Marijuana has been used medicinally for thousands of years. Despite this, stigma remains. Many Americans still associate marijuana with substance abuse, addiction and crime. But even though there is still some hesitancy to go public with one’s legal use of marijuana, chances are that you know someone who either has a card or is considering getting one.

Chuck Yahn is a local resident. Because of multiple accidents as a teen, he deals with chronic pain. At a routine appointment with his primary care physician, he learned that she was certified to prescribe medical marijuana.

“She educated me for 40 minutes about how it could help me,” Yahn says. 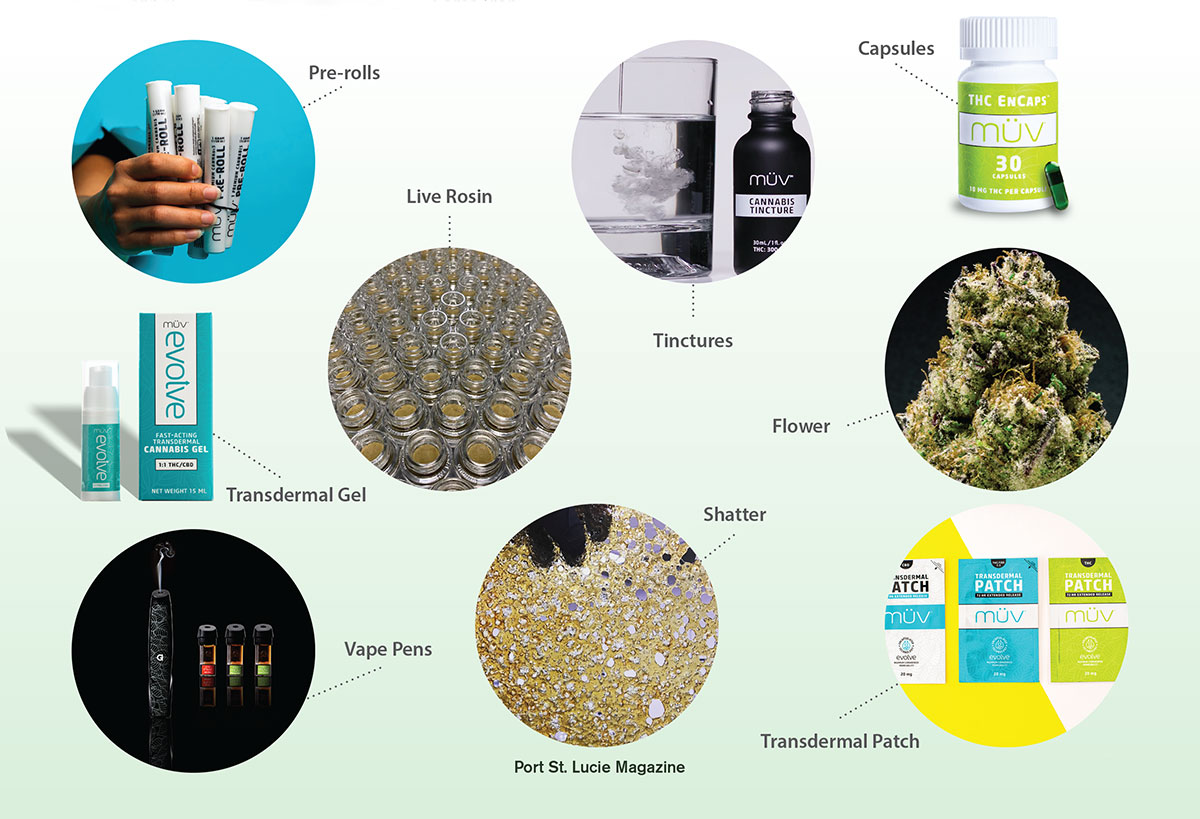 Yahn also had observed the benefit his mother received from marinol, a pill form of cannabis, prescribed for symptoms associated with stage 4 cancer. “It drastically improved her quality of life,” he says. After talking it over with his wife, he applied for a medical marijuana card two years ago.

Yahn works at a substance abuse treatment facility where he’s heard stories about prelegal days in the area from clients. “If you were lucky enough to have friends who lived in states where [pot] was legal, you could get them to send you stuff — cartridges and edibles, not flower. The smell would get you caught!” he says.

USE RISES DURING PANDEMIC

As an essential service, dispensaries were not adversely affected by the shutdown due to COVID-19.

In fact, Yahn says that during the pandemic, use of all substances — legal or otherwise — increased.

“My clients said their medical marijuana helped with the stress,” he says. “It’s interesting, what once was viewed as taboo is now being used as a treatment modality.”

While some people still believe that marijuana is a gateway to harder drugs, the National Institute on Drug Abuse found that for the majority of users, it isn’t.

“My clients are often in pain of one form or another,” Yahn says, recalling one woman who hadn’t responded well to a variety of treatments. “I recommended medical marijuana and it changed her life.”

It changed Terri Colledge’s life, too. Colledge is retired, living in a local 55-plus community. Diagnosed with Parkinson’s and restless leg syndrome, she knows four people just on her block with cards. When her neurologist recommended cannabis to help her sleep and reduce hand tremors, she decided to try it, having heard stories of successful results. “I’ve been able to cut back on some of my medications.”

WHAT ARE THE BENEFITS?

Marijuana’s two therapeutic ingredients are commonly known as CBD and THC. While CBD products are touted at convenience stores, upscale makeup counters, pharmacies and even doctor’s offices, products with THC, associated with a euphoric high, are only available legally in Florida by prescription.

“I tried a bunch of strains and products,” Yahn says. “With edibles, I was more sedated than I wanted to be.”

Smokables proved more effective for Yahn, although he stays away from dried cannabis buds.

“Vape cartridges are less harsh on the lungs and don’t have that pot smell,” he says. “On days when I’m having an issue with pain, I can take one hit and get relief.”

Because Colledge needs help sleeping, the edibles suit her well. After trying gummies, she settled on marijuana-infused chocolate, eaten an hour or so before bed. Some patients add dried marijuana to recipes.

While it’s doubtful medical marijuana will ever be stocked on corner pharmacy shelves, local dispensaries have sprung up in the space of only a few years to meet Port St. Lucie’s growing demand. Colledge shops at Trulieve, what the company calls a “Truliever.” Always nervous about drugs, she says Trulieve employees educated her. “It’s handy and has a lot of sales. There’s a Senior Day, too.”

Dispensaries are spaced throughout the city. Trulieve is on Gatlin Boulevard, while One Plant, Surterra, and Liberty Health Services are positioned along U.S. 1. MÜV Dispensary is in St. Lucie West. The number will likely grow, as indicated by industry trends. Leafly, a cannabis information company, reports that Florida is the third-best state when it comes to jobs in the industry, up a whopping 103% from 2020 — a year that saw high job losses in many other businesses.

Although medical marijuana is legal here, drug-free workplaces may fire or refuse to hire on the basis of its use by employees and applicants. Other inconsistencies between lawmakers and between states and the federal government also muddy the waters.

Planning an upcoming trip was more challenging for Colledge because of her destination.

“TSA agents would probably overlook my edibles at the airport,” she says, “but I’m going to Texas, where medical marijuana is illegal.”

With the possibility of a five-year prison sentence, her legally prescribed chocolate bars will have to wait until she returns home.

Thirty-five states have legalized medical use for cannabis, already a $1.2 billion business in Florida and multiplying locally. With roots — literally — going back thousands of years, its health benefits are no longer debatable.

Dispensaries continue to improve and develop their products to supply a growing demand both here in Port St. Lucie, and throughout the state.

As Yahn puts it, “I don’t know the science of it all but I know it works.”