‘Wish you were here’ 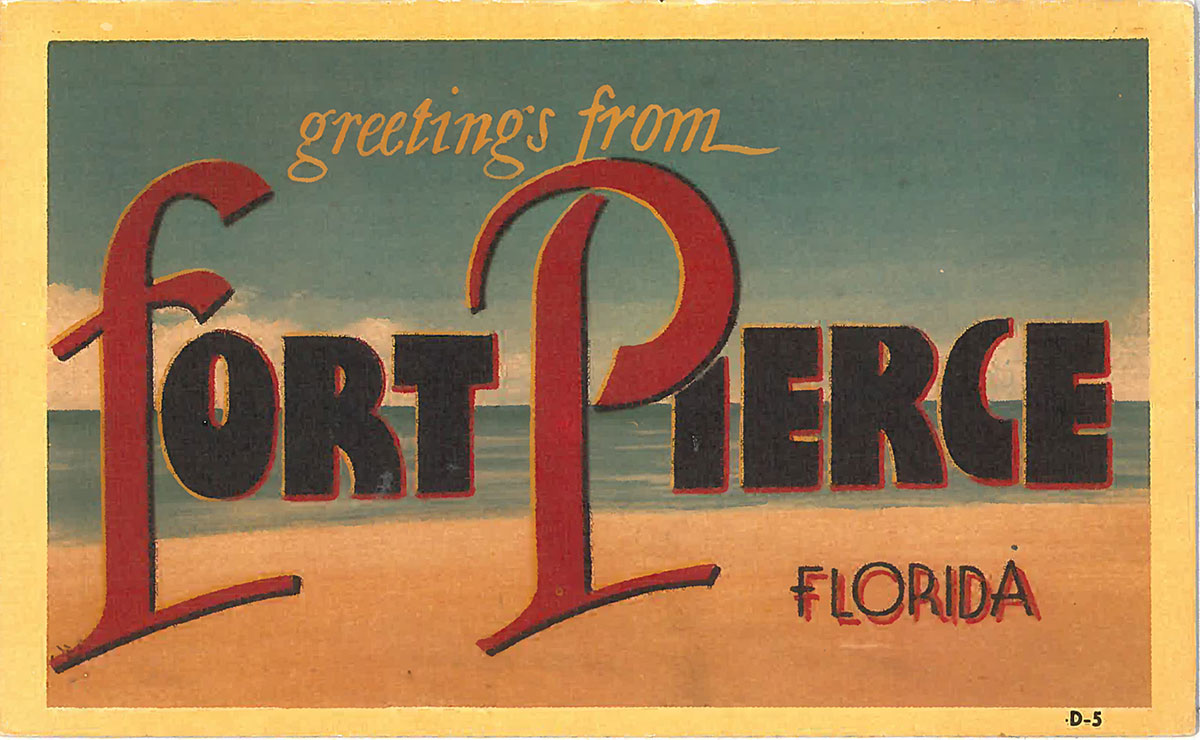 Racks of postcards were once in the doorways of every pharmacy and trinket shop, but now they’re hard to find thanks to texting, Instagram, and other forms of electronic messaging. The style above became popular around 1950, when emigration to the Sunshine State started to boom. JOHN CARVELLI COLLECTION

One hundred years ago there was something in the water in White City, the Danish settlement outside of Fort Pierce — or at least that’s what the postcards of the era would have you think because many of the images sent from the tiny community included couples kissing — pretty racy stuff for the time.

Postcards were the selfies and status updates of days gone by, purchased and mailed for a mere cent in the early 1900s, when they were sold in some 80,000 retail outlets across the country.

While their usage peaked at 675 million mailed in 1908 according to U.S. Postal Service historians, postcards had many purposes beyond sharing vacation scenes. These included sending shopping lists and planning rendezvous, as well as playing a role in recruiting for growing Florida communities.

Like antique washboards, roller-skate keys and record players, postcards that were once part of everyday life have been relegated to collectors’ items that are now bought and sold for historical or sentimental value. The once-ubiquitous memento of travel is hard to find, except at specialized shows for collectors.

In his 25-year-old collection of Treasure Coast postcards, Port St. Lucie City Commissioner John Carvelli has many that date back to the first decade of the 20th century, showing Fort Pierce with dirt roads, horse-and-buggy transportation and agricultural workers in pineapple fields. And he has several showing couples kissing in White City.

“These are especially rare and valuable,” he says dealing out black and white images showing workers in farm fields and another of a cattle drive. Nearby he’s spread a tabletop with pastel-colored prints of old downtown Fort Pierce with Model A cars lining the curb outside the Sunrise Theatre and another of Pug Ergle’s boat plying the coastline, circa 1940.

“Look at this!” he exclaims. “A horse and buggy crossing Taylor Creek. That’s old.”

ECLECTIC COLLECTOR
Carvelli has always been a collector with eclectic tastes: paintings, antiques, old rifles. Unlike bulky items that his wife might object to, hundreds of his postcards fit in a box he can tuck under his arm, each in a stiff acid-free protective sleeve.

While he expounds on the relative quality and value of each, these seem special to him. They’re not just interesting items that he particularly wants to sell at a profit, they’re historical images of the places where he grew up, which he loves. He’s proud to loan them to local newspapers for history columns and recently scanned some for display at St. Lucie Historical Society’s Bud Adams Cultural Center and Museum at the P.P. Cobb Store.

“This is one of my favorite collections,” he says. “It’s easy to start and so much fun. See these blue tones? That’s Blue Delft, a type of finish. Those are a collection within my collection. And these,” he says with excitement in his voice, “military collectors would love to have.” It’s a set of 10 black and white images from the Navy amphibious training school at Fort Pierce in the 1940s: landing craft practice, semaphore (flag) drills and troops lined up on the beach. And he has the original envelope they came in.

Of course there are also postcards that are entertaining precisely because they aren’t especially attractive or valuable, such as images of motels, bridges and restaurants. And there are plenty of aerial images of the barrier islands, trailer parks and young men fishing under the banner “Fort Pierce for Pleasure.” But each elicits a chuckle and a gee-whiz glimpse into what appears to be a simpler time.

SHORT AND SWEET
Picture postcards transformed letter-writing culture when they were introduced at the Chicago Columbian Exposition in 1893; the craze peaked between 1910 and 1915. White borders around the pictures denote a specific style that started in the 1930s; the ones with the big bubble letters saying “Greetings from” were popular in the 1940s and ’50s.

Advances in printing allowed photo cards, called chrome, to proliferate from the 1950s onward. Flip the cards over and you’ll find a variety of styles, with the oldest allowing only addresses on the back — you had to squeeze a greeting or message into a tiny space on the front under the photo, something brief, similar to Twitter’s 140 character limit.

Of course it’s also fascinating to read what people wrote on postcards: Addressed to Mrs. LeMond, one of Carvelli’s oldest pieces says, “Mama will you go to the depot and get the rate for me to go” [illegible]. It’s a throwback to the area’s quiet, uncrowded days as the address was only a name and town without street or zip code.

Postcards made Florida an alluring, exotic destination for many people.

“Florida was a fantasy for me as a kid growing up in Illinois in those gray winters,” says retired Florida State University professor, historian and author Gary Mormino, who wrote about Florida in Land of Sunshine, State of Dreams.

“An image of an orange tree would have been mind-blowing for a working-class family who’d never eaten an orange, nevermind seen rows of those trees under a bright blue sky,” he explains. “Postcards are such an effective medium, they’re cheap and omnipresent. Today we’re bombarded with so many visual images that I’m not sure a young person could comprehend what a big deal it was to get a postcard 100 years ago.”

RECRUITMENT TOOLS
Mormino points out that postcards were among the recruitment tools that St. Petersburg and other cities used to draw in tourists and year-round residents alike, playing on exotic themes of bathing beauties and glorious sunsets framed by palms.

Oftentimes Florida cities gave professional photos free to postcard companies for reproduction — and reaped the public relations benefit of people associating those snapshots with the promise of sun and fun with a Florida vacation or residence.

He speculates that chain migration — the Florida phenomena in which communities encompass folks who are from the same town or geographic area in another state — was likely influenced by picture postcards sent by the first to move South.

Postcard images of Florida might be part of the reason David Canfield moved to Cocoa from Rochester, N,Y., six years ago.

“When I moved down here there were lots of things I wanted to see from the postcard pictures,” he says.

The former postal employee has collected picture postcards since 1968 and joined the Cocoa-based Space Coast Postcard Club to stay in touch with other collectors. Now he’s closer to the postcard shows that crop up during the winter, scouting for items he can add to his collections of Rochester and Brevard County images.

Postcard clubs, he says, are dying out with their aging members, but “once in a while a younger person comes in and gets hooked.”

POSTCARD SHOWS
Despite the decline in postcards sent by mail and the changing demographics of postcard clubs, Mary Martin isn’t ready to give up on them. She’s a second-generation businesswoman from Havre de Grace, Md., whose parents started hosting some of the large postcard shows in Florida decades ago. This year the Mary L. Martin Postcard Show was moved in January from Orlando to Deland for the first time.

“You don’t have to be a dedicated collector to love postcards,” she says. “People love looking at the pictures and they also love reading other people’s mail.”

The most sought-after Florida picture postcards are those created before 1930, when the state was a no-man’s land of lush foliage, empty roads, and unspoiled views, she says.

“You have to remind yourself that 100 years ago you couldn’t turn on the television and see these places like you can now,” she explains. “When the mailman came with a postcard from your aunt in Florida you’d put it in an album and look at it again and again. It was a way to see another part of the world you’d never have access to, it was exotic and a big deal because it was far away.”

Carvelli still attends some of the postcard shows like Martin’s that are held during the winter, including one set for the Palm Beaches. He is still looking for a few cards that will enhance his collection, but is unsure where the hobby will eventually take him.

“Some day down the road I will probably give them to a museum and let them put the postcards in a place where people can appreciate them,” he says.