Working with a client who is willing to take a risk is always gratifying for an interior designer, especially one as talented as Allen Holmes.

A multipurpose designer with an eye for detail, the fifth generation Floridian’s family settled Fort Drum in the late 19th century. His Hobe Sound design studio has developed a loyal clientele with Holmes as its central creative force. Because of an ability to achieve or surpass his clients’ aspirations, his work has been commissioned from Canada to Colorado, the Bahamas to New England.

A recent project on Jupiter Island is evidence of Holmes’ versatility and is a perfect illustration of what happens when designer meets open-minded clients and attains maximum results.

Owners Emmett and Debbie Boyle knew Holmes’ work through other condos he’d designed and reconfigured in the same building, Claridge of Jupiter Island. They decided to work with him to reimagine their 3,500-square-foot residence. With two bedrooms, a den and 31/2 baths, the condo is accessed through a private, key-fob-secure elevator with entry directly into the foyer of the home.

The condo is bound by the Atlantic and the Intracoastal Waterway, and with a love of boating and being on the water, the owners gave Holmes a mandate: maximize the views.

Transformed over the course of a two-year rebuild, “We took it down to the concrete floors and gutted the space,” says Holmes. In its former style, according to owner Debbie Boyle, “It kind of looked like a hunting lodge, with large built-in cabinets.”

STARTING FROM SCRATCH
Taking care to match the palette to the elements, and capitalize on the proximity to water, Holmes combined modern and traditional components and came up with a design that is as bold as it is authentic. Now filled with color and modern art, the space underwent a major conversion.

Originally, a walled-off kitchen obscured the ocean view. But a dubious Emmett Boyle wasn’t sure the wall could come down to open up the space.

“I’m an engineer,” he says. “And I didn’t think so, but Allen took that wall out and now any place you stand in the front you can see blue ocean. It was done through Allen’s tenacity and talent.”

The kitchen cabinetry by Irpinia, a luxury Canadian brand, was sourced through a local dealer in North Palm Beach. Built-in garage-door style cubbies allow an easily clean and orderly kitchen. The stack of wall appliances utilizes every requisite component: warming drawer, oven, microwave and a built-in TV on top to form a complete panel.

A ceiling-flush hood over the center-island cooktop also encases the lighting. Both are operated by remote control. The complete unobtrusive, clean look is capped off by sleek linear air conditioning vents.

One of the most compelling aspects of the home is the flow of the principal space, which is easily described as smooth. Perhaps because Holmes and the Boyles chose flooring that telegraphs the feel of a stretch of pristine, sandy beach. The Italian-made material, an elegant, highly polished porcelain, is called honey onyx.

With tiles roughly 30 inches square, the tawny and cream colored floor looks exactly like stone. Five by 10-foot, quarter-inch porcelain sheets are cut into squares to “get the highest yield out of the slabs,” Holmes says. “Real onyx would be 10 times the price. And porcelain is not porous, so it’s more durable and practical.”

SHOWCASING ART
Curating objects for the home became integral to matching and mixing function and placement for the Boyles’ existing art collection. The hallway was developed into a gallery space enhanced by recessed lighting designed specific to each piece.

“Allen brought lighting experts in from outside Florida and got all that tailored,” Emmett Boyle says. “A lot of what you see is an application by great electricians.”

On using unique materials and components, Holmes says, “The process is to come up with an idea, raise it with the client who will hopefully take the risk and the plunge.”

Two chandeliers designed by a friend of the Boyles in Ohio were maintained in the new concept.

“They’re blue crystal and opals,” Debbie Boyle says. “They were created to bring in the idea of water, every shade of blue you see in the ocean is in the chandeliers.”

Holmes designed 4-inch wide adjustable vertical plantation shutters that can obscure the adjacent condo building and still maintain the ocean view. When turned the opposite direction, the shutters allow a view of the Intracoastal.

A metal sculpture, entitled Silverstar, by world-renowned artist John Raimondi, was commissioned for the home. The artist normally works on a grand scale, such as his 41-foot tall Artorius [King Arthur], adjacent to Heathrow Airport outside London. Silverstar, at 48 inches, rests on a round metal plinth, designed by Holmes. Recessed LED lights at the base, inside what Holmes describes as a moat, are directional and illuminate the sculpture from any angle, casting shadows that play across the ceiling and the room.

ROOM FOR WINE
Down the hall, a closet was converted into a wine vault, with a 500-bottle capacity. The metal door with a porthole window gives it a nautical feel.

The den, which can be converted to a third bedroom, is anchored by an impressionist abstract landscape painting by New York artist Brian Rutenberg. For a built-in desk and under-TV cabinet, Holmes used what he calls puzzle veneer from Italy, consisting of inlaid panels resembling puzzle pieces.

The den leads into the master bedroom, which is also accessed from the hallway.

A pristine view of the Intracoastal fills the master bedroom but can offer unreserved privacy compliments of remote-controlled electronic sheers and black out curtains that come down vertically.

The master bath is very much a his and hers affair with two sinks, two toilet cabins — hers with a bidet — and a large shower dividing the space.

Holmes has worked with the construction firm Carrere General Contractors of Hobe Sound on numerous projects, and their partnership on this one delivered exquisite results.

BROUGHT BACK MEMORIES
For the Boyles, the home was a serendipitous bit of luck on a Sunday afternoon. They both worked at a West Virginia-based aluminum company, she as vice president of administration with human resources and government relations responsibilities, he as CEO.

In West Palm Beach for a company event, they were impressed with the area and preparing to commit to a house under construction on the mainland. Their real estate agent encouraged them to see a barrier island condo newly on the market. Having spent time on North Carolina beaches as a child, Emmett Boyle remembers their house on the dune.

“We entered the [condo] property, and it was right above the dune, overlooking the ocean, and I thought back to North Carolina,” he says.

They put a bid on the residence that afternoon.

Six years later, they retired and began the renovations with Holmes. As global travelers, one of the things the couple most enjoys about living in Claridge is the other residents who are from many different countries and offer cultural diversity.

Their home in eastern Ohio is antebellum-style and sits on a 300-acre ranch where they raise registered black angus cattle. They normally spend at least half the year in Jupiter.

Holmes’ road to a design expert has led him far from his small hometown of Okeechobee. Always artistically inclined as a child, in painting and drawing, it wasn’t until he joined the U.S. Navy as a parachute rigger that he learned to sew, giving him knowledge of materials and their manipulation potential.

Later he worked at a department store chain in charge of displays, then as a buyer traveling to New York acquiring merchandise. Design then became his focus. Holmes first passed the National Council for Interior Design qualifications in 1983 and he’s a member of the American Society of Interior Designers. The longevity of his expertise is reflected in the fact that his professional business license is number eight.

In his Hobe Sound studio, he works closely with Gail McLean, an associate for 32 years.

“She’s my left and right hand,” he says. “The fabric maven in my office, she reviews the textiles and decide what to use where.”

And nearly all of Holmes’ projects are photographed by Tim Lee.

From a pioneer, cattle ranching family in the heart of Florida, Holmes must have grown up with that essence in his soul. Like his namesake, H. Allen Holmes, who settled Fort Drum in the 1870s, his success relies on originality and imagination. And like any true pioneer, he’s thoroughly unafraid to take a risk. 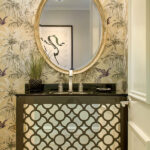 The powder room features foil wallpaper and a decorative sink cabinet for storage. 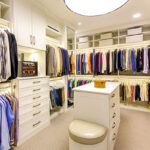 The master bedroom closet was designed for maximum packing efficiency because of the Boyles’ frequent travel schedule. The lights are activated automatically and all the closet rods are lit. 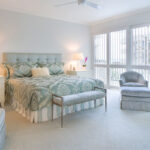 A spacious private guest suite on the south side of the building offers views of the Indian River from its many windows and its private balcony. 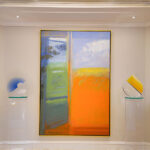 The elegant honey onyx porcelain flooring opens up throughout the main living areas. Modern art pieces from the Boyles’ collection were given prime display space. 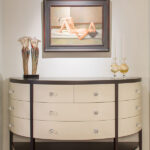 Holmes chose modern, sleek, elegant furnishings throughout, such as this deco cabinet which perfectly accents the art. 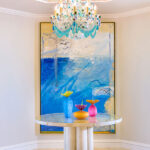 Two chandeliers, existing features retained in the newly renovated space, were designed for the Boyles in Ohio and reflect the colors of the ocean. 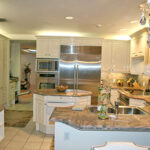 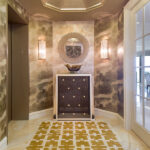 The foyer offers private elevator access and showcases the other chandelier that reflects the ocean colors and ambience. 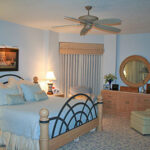 The master bedroom before renovations. 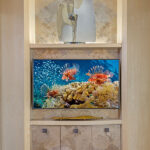 The ocean theme runs through the condominium, as in the den where Holmes used Italian puzzle veneer on the built-ins that surround the art.
Please follow and like us: